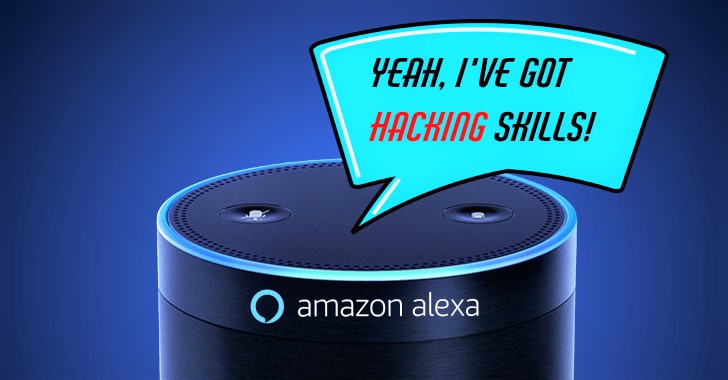 Attention! If you use Amazon’s voice assistant Alexa in you smart speakers, just opening an innocent-looking web-link could let attackers install hacking skills on it and spy on your activities remotely.

According to a new report released by Check Point Research and shared with The Hacker News, the “exploits could have allowed an attacker to remove/install skills on the targeted victim’s Alexa account, access their voice history and acquire personal information through skill interaction when the user invokes the installed skill.”

“Smart speakers and virtual assistants are so commonplace that it’s easy to overlook just how much personal data they hold, and their role in controlling other smart devices in our homes,” Oded Vanunu, head of product vulnerabilities research, said.

“But hackers see them as entry points into peoples’ lives, giving them the opportunity to access data, eavesdrop on conversations or conduct other malicious actions without the owner being aware,” he added.

Amazon patched the vulnerabilities after the researchers disclosed their findings to the company in June 2020.

An XSS Flaw in One of Amazon’s Subdomains

Check Point said the flaws stemmed from a misconfigured CORS policy in Amazon’s Alexa mobile application, thus potentially allowing adversaries with code-injection capabilities on one Amazon subdomain to perform a cross-domain attack on another Amazon subdomain.

Put differently, successful exploitation would have required just one click on an Amazon link that has been specially crafted by the attacker to direct users to an Amazon subdomain that’s vulnerable to XSS attacks.

In addition, the researchers found that a request to retrieve a list of all the installed skills on the Alexa device also returns a CSRF token in the response.

The primary purpose of a CSRF token is to prevent Cross-Site Request Forgery attacks in which a malicious link or program causes an authenticated user’s web browser to perform an unwanted action on a legitimate website.

This happens because the site cannot differentiate between legitimate requests and forged requests.

But with the token in possession, a bad actor can create valid requests to the backend server and perform actions on the victim’s behalf, such as installing and enabling a new skill for the victim remotely.

In short, the attack works by prompting the user to click on a malicious link that navigates to an Amazon subdomain (“track.amazon.com”) with an XSS flaw that can be exploited to achieve code-injection. 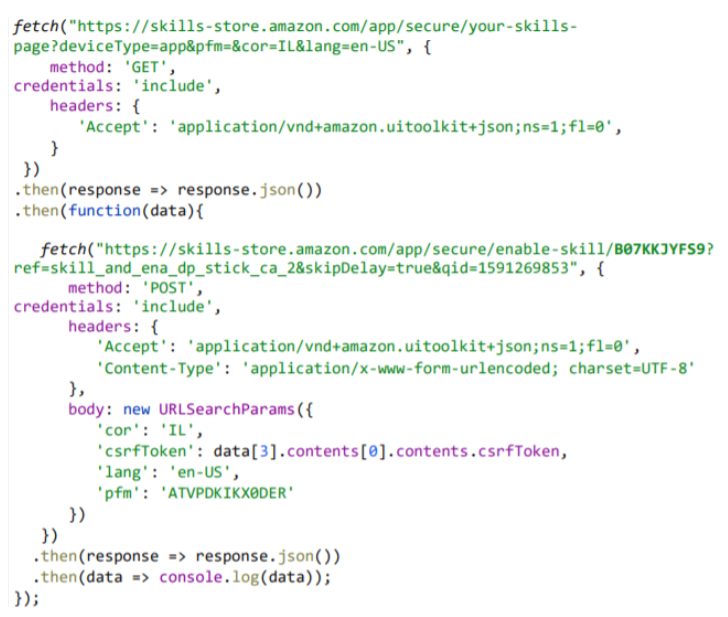 The attacker then uses it to trigger a request to “skillsstore.amazon.com” subdomain with the victim’s credentials to get a list of all installed skills on the Alexa account and the CSRF token.

In the final stage, the exploit captures the CSRF token from the response and uses it to install a skill with a specific skill ID on the target’s Alexa account, stealthily remove an installed skill, get the victim’s voice command history, and even access the personal information stored in the user’s profile.

The Need for IoT Security

With the global smart speaker market size projected to reach $15.6 billion by 2025, the research is another reason why security is crucial in the IoT space.

As virtual assistants become more pervasive, they are increasingly turning out to be lucrative targets for attackers looking to steal sensitive information and disrupt smart home systems.

“Cybercriminals are continually looking for new ways to breach devices, or use them to infect other critical systems. Both the bridge and the devices serve as entry points. They must be kept secured at all times to keep hackers from infiltrating our smart homes.”